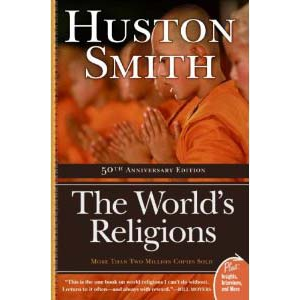 This is one of the best books I have ever read. Huston Smith presents the religions from the inside out. Each one is viewed as if he were an adherent of that religion which makes his words ring with the truth of that point of view.

Huston Smith's masterpiece explores the essential elements and teachings of the world's predominant faiths, including Hinduism, Buddhism, Confucianism, Taoism, Judaism, Christianity, Islam, and the native traditions of Australia, Africa, Oceania, and the Americas.

This book was required reading for me over 20 years ago when I was in college. Huston Smith does an awesome job in covering the major religions of the world without including any bias towards one or another. I lost my original book so I purchased this new edition and will be reading it again and again and again. I highly recommend it to anyone interested in learning more about world religions.

Emphasizing the inner—rather than the institutional—dimension of these religions, Smith devotes special attention to Zen and Tibetan Buddhism, Sufism, and the teachings of Jesus. He convincingly conveys the unique appeal and gifts of each of the traditions and reveals their hold on the human heart and imagination.

Huston Smith is internationally known and revered as the premier teacher of world religions. He is the focus of a five-part PBS television series with Bill Moyers and has taught at Washington University, the Massachusetts Institute of Technology, Syracuse University, and the University of California at Berkeley. The recipient of twelve honorary degrees, Smith's fifteen books include his bestselling The World's Religions, Why religion Matters, and his autobiography, Tales of Wonder.