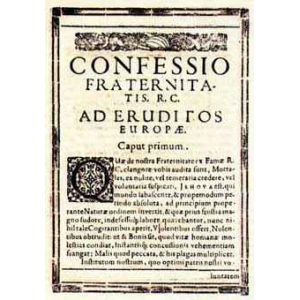 Whatsoever is published, and made known to everyone, Concerning our Fraternity, by the foresaid Fama, let no man esteem lightly of it, nor hold it as an idle or invented thing, and much less receive the same, as though it were only a mere conceit of ours.

It is the Lord Jehovah (who seeing the Lord's Sabbath is almost at hand, and hastened again, his period or course being finished, to his first beginning) doth turn about the course of Nature; and what heretofore hath been sought With Great pains, and daily labour, is now manifested unto those who make small account, or scarcely once think upon it; but those which desire it, it is in a manner forced and thrust upon them, that thereby the life of the godly may be eased of all their toil and labour, and be no more subject to the storms of inconstant Fortune; but the wickedness of the ungodly thereby, with their due and deserved punishment, be augmented and multiplied.

Although we cannot be by any suspected of the least heresy, or of any wicked beginning, or purpose against the worldly government, we do condemn the East and the West (meaning the Pope and Mahomet) blasphemers against our Lord Jesus Christ, and offer and present with a good will to the chief head of the Roman Empire our prayers, secrets, and great treasures of gold. Yet we have thought good, and fit for the learned's sakes, to add somewhat more to this, and make a better Explanation if there be anything too deep, hidden, and set down over dark in the Fama, or for certain reasons were altogether omitted, and left out; hoping herewith the learned will be more
addicted unto us, and be made far more fit and willing for our purpose. 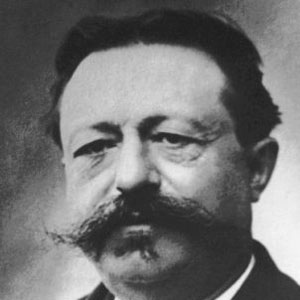 Anthelme Nizier Philippe was born on April 25, 1849 in Le Rubathier, Loisieux, Savoy, France, the son of peasants. He was also known as "Maitre Philippe" or "Maitre Philippe de Lyon". His mother was Marie Vashod (1823-1899) and his father Joseph Philippe (1819 - 1898). From the age of fourteen he stayed with his uncle Vachod, a Butcher in Lyon. He gained a reputation as a healer by the age of thirteen, and by 1895 he ran a school of magnetism and massage at Lyon, which was linked to a similar establishment run by Papus in Paris. His own teaching of 'magnetisme', though, was grounded in prayer and spiritual and personal discipline, omitting the customary hand-gestures and outward practices of other magnetists.

He soon gained a reputation as a miracle worker amongst Paris occultists. Having been harassed for practicing medicine without a license, he went to St Petersburg where he was awarded his Doctor's Diploma in recognition of extraordinary feats of remote healing conducted in St Petersburg.

In October 1884 he presented a paper (published in French) entitled "Principles of Hygiene applicable in Pregnancy, Childbirth and Infancy" at the University of Cincinnati, Ohio. In recognition of this the University conferred a Doctorate of Medicine on him. Many other academic and social honours were conferred on him during the 1880s and 1890s in France and Italy.

A French police report of 8 November 1902, stated that he was 5 feet and 5 inches tall, rather corpulent, brown-haired, deep blue-eyed with a vivid gaze.

His son, Albert, died of smallpox at the age of three months. His daughter, Jeanne Victoire, died on 29 August 1904 aged 25, just before her seventh wedding anniversary. He refused to heal her, saying that it was Heaven's wish that she should go on ahead, and predicted the precise course of her illness and death. "This death," he said, "has for me been a living crucifixion." Philippe himself died on 2 August 1905 at the age of 56, in L'Arbresle, Rhone, France where he was living. He was buried in the cemetery of Loyasse (France). 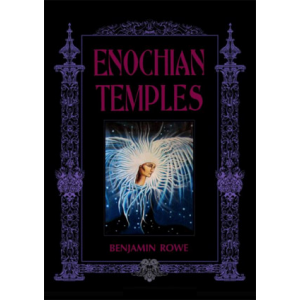 The Lesser Angles of the Tablets represent the microcosm within the Enochian system. They reflect in miniature the Symbolism of the Six conjoined with the Four that is the keynote of each Tablet as a whole, and can be thought of as expressing the lesser poles of Tiphereth-Malkuth within the larger polarity of Kether-Malkuth expressed by the entire Tablet.

To construct the altar of a Lesser Angle, each Servient square of the Lesser Angle is assigned to a water-aspect cube measuring one unit on each side. The four cubes for each row of Servient squares are grouped into a larger square, in the same way as was done for the Kerubic pillars in the Original design. These larger squares are then stacked on top of each other in the same order as in the Tablet. This produces a shape two units square and four units high, the relative dimensions of the standard
double-cube altar of the universe. 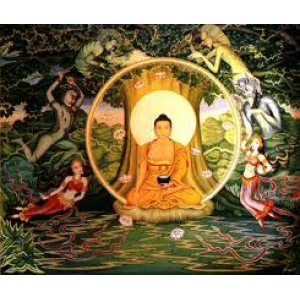 1. I believe that the Supreme is completely transcendent and can be described as Sunya, a void or state of nonbeing.
2. I believe in the Four Noble Truths: 1) that suffering is universal; 2) that desire is the cause of suffering; 3) that suffering may be ended by the annihilation of desire; 4) that to end desire one must follow the Eight-Fold Path.
3. I believe in the Eight-Fold Path of right belief, right aims, right speech, right actions, right occupation, right endeavor, right mindfulness and right meditation.
4. I believe that life's aim is to end suffering through the annihilation of individual existence and absorption into nirvana, the Real.
5. I believe in the "Middle Path," living moderately, avoiding extremes of luxury and asceticism.
6. I believe in the greatness of self-giving love and compassion toward all creatures that live, for these contain merit exceeding the giving of offerings to the Gods.
7. I believe in the sanctity of the Buddha and in the sacred Scriptures of Buddhism: the Tripitaka (Three Baskets of Wisdom) and/or the Mahayana Sutras.
8. I believe that man's True Nature is divine and eternal, yet his individuality is subject to the change that affects all forms and is therefore transient, dissolving at liberation into nirvana.
9. I believe in dharma (the Way), karma (cause and effect), reincarnation, the sanga (Brotherhood of seekers) and the passage on Earth as an opportunity to end the cycle of birth and death. 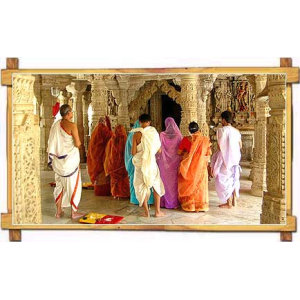 Strange it may seem, thousands of years before the west came out with its quantum theory, the ancient Indians thought of the existence of atoms as the building block of matter. Reference to matter consisting of atoms appear not only in some schools of Hindu philosophy such as the Nyaya Vaisheshika School, but also in Jainism, which regards matter as the aggregate of atoms and as the source of bondage and the cause of all karma.

The original nature of Jiva is a pristine state, a mass of pure consciousness, devoid of any coarseness or grossness which it develops as it enters the mundane world and becomes subject to the laws of karma. Since matter carreid such an important influence in the lives of the individual jivas, the Jain monks considered it as their duty to study matter in its various aspects and work out a possible solution to over come its impact.

The matter is referred as pudugala in Jainism. It is considered to be an aggregate of individual atoms (paramanu) coming together. Depending upon the nature of atoms involved, matter assumes varying degrees of fineness or coarseness and accordingly impacts the lives of various jivas which are caught in the mire of samasara and the inviolable laws of karma.

An atom is without any point, without a beginning and without an end. It is eternal, can neither be created nor destroyed. It is invisible, imperceptible. Only the adepts can perceive it through their all knowing vision.

Sometimes atoms can travel with incredible velocity and traverse the entire universe in the blink of an eye. The Jains believe that atoms are uniform in nature, but by coming together in varying degrees and combinations they produce a multitude of material things.

The souls are not made up of matter, but are bound by it in their mundane state. They cannot escape from the contact with matter till they liberate themselves through good conduct, performance of austerities and pure living. The ultimate aim of every follower of Jainism is to become free from all possible contact with matter. 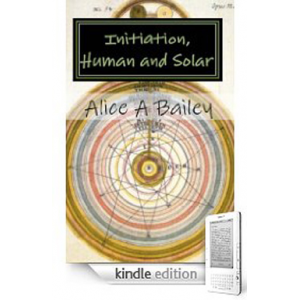 The subject of Initiation is one that has a great fascination for thinkers of all schools of thought, and even those who remain sceptical and critical would like to believe that this ultimate attainment is possible. To those who do not believe that such a goal is possible this book is offered for what it may be worth as a formulation of an interesting hypothesis. To those who anticipate such a consummation of all their endeavours, this book is tendered in the hope that it may prove an inspiration and a help.