In The Land Of The Living Dead 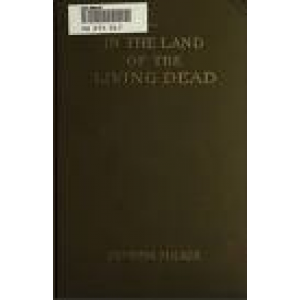 Book: In The Land Of The Living Dead by Prentiss Tucker

IN THE LAND OF THE LIVING DEAD CHAPTER I A Yisit to the Invisible Planes JT ALL came about from a German high-explosive shell. Nothing happens without a cause. We might say that this story began in Germany when Gretchen Ham-merstein put the finishing touches on a certain high-explosive shell and with the contact of her fingers filled the shell with the vibrations of her hatred for the Americans. We might note the various occurrences which, each the result of an endless train of circumstances, contributed to the fact that this particular shell was brought to the German,front at just such a time and just such a place. But to follow up these lines of happenings, almost infinite in number, would require an infinitude of patience. So we will take up the history of events when this high-explosive shell burst in the American trenches, scattering, besides its material and visible charge and fragments, the hatred for Americans which Gretchen Hammerstein had packed into it. - Jimmie Westman

Download Prentiss Tucker's eBook: In The Land Of The Living Dead

Wim Van Den Dungen - Enoch And The Day Of The End
Israel Regardie - The Art Of True Healing
Dion Fortune - The Machinery Of The Mind
Prentiss Tucker - In The Land Of The Living Dead
Posted by Unknown at 7:40 PM