Hesiod The Homeric Hymns And Homerica 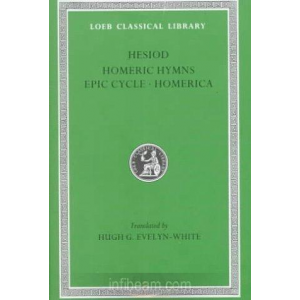 THIS VOLUME CONTAINS practically all that remains of the post-homeric and pre-academic epic poetry. I have for the most part formed my own text. In the case of Hesiod I have been able to use independent collations of several MSS. by Dr. W.H.D. Rouse; otherwise I have depended on the apparatus criticus of the several editions, especially that of Rzach (1902). The arrangement adopted in this edition, by which the complete and fragmentary poems are restored to the order in which they would probably have appeared had the Hesiodic corpus survived intact, is unusual, but should not need apology; the true place for the “Catalogues” (for example), fragmentary as they are, is certainly after the “Theogony.”

Of the fragments of the Epic Cycle I have given only such as seemed to possess distinct importance or interest, and in doing so have relied mostly upon Kinkel’s collection and on the fifth volume of the Oxford Homer (1912). The Texts of the “Batrachomyomachia” and of the “Contest of Homer and Hesiod” are those of Baumeister and Flach respectively: where I have diverged from these, the fact has been noted.

NOTE: Greek words at times appear in ALL CAPS. In text notations are in red and surrounded by parentheses and hyperlinked to the corresponding section’s endnotes.