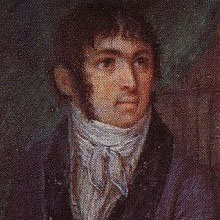 Antoine Fabre d'Olivet (December 8, 1767, Ganges, Herault – March 25, 1825) was a French author, poet and composer whose Biblical and philosophical hermeneutics influenced many occultists, such as Eliphas Levi and Gerard Encausse. His best known work today is his research on the Hebrew language, Pythagoras's thirty-six Golden Verses and the sacred art of music. His interest in Pythagoras and the resulting works started a revival of Neo-Pythagoreanism that would later influence many occultists and new age spirtitualists. He attempted an alternate interpretation of Genesis, based on what he considered to be connections between the Hebrew alphabet and Hieroglyphs. The discovery of the rosetta stone and the subsequent understanding of Egyptian Hieroglyphs that followed would prove much of this particular work technically mistaken. He was declared a non-person by Napoleon I and condemned by the Pope.

An interesting story involves his healing a deaf boy of his hearing impairment, and then having Napoleon officially declare that he is never again to heal another person of deafness. He indicates that he kept the letter of notice out of amusement. Outside of esotericism, he also invented the poetic measure of eumolpique. He had an argument with Lord Byron over the British poet's publishing of a play, "Cain", which questioned a Christian view of Genesis. d'Olivet believed the play would destroy Christian beliefs and undermine the spirit of the English people at the very time they needed some faith to endure a very difficult life. Byron's response went something like, "I'm only a poet; I don't know anything about these philosophical concerns of yours!" The play was very popular in England.