The Magic Ritual Of The Sanctum Regnum 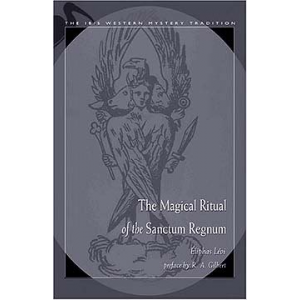 Book: The Magic Ritual Of The Sanctum Regnum by Eliphas Levi

This Translation of a previously unpublished work by the late Alphonse Louis Constant, or, as he preferred to call himself, Eliphaz Levi, is published with the consent of its possessor, Mr. Edward Maitland, the eminent collaborateur of the late Dr. Anna Kingsford, to whom it was given by the Baron Spedalieri, so well known as the friend, disciple, and literary heir of Eliphaz Levi. The original MSS., which is in the handwriting of Levi himself, is written upon pages interleaved with the text of a printed copy of a work by Trithemius of Spanheim, entitled De Septem Secundeis: the edition was published at Cologne, and is dated 1567. This work of the Abbot Trithemius is a very curious and interesting dissertation upon the ruling of the world by the seven great Archangels, to each of whom in succession is alloted a period of 354 years and 4 months.

The ordinary reader who has made no special study of the magical writings of Eliphaz Levi, nor of the Kabalah, may consider that, however interesting the subject?matter of many of the following chapters, the Connection between the Tarot Trumps and the details given under each heading is but slight. It must be understood that there is in all cases a direct relation between the card and subject; but the keys which connect them are missing by intention of the author, and yet are obtainable by study of Levi other works.

"The Mysteries of Magic, a Digest of the Writings of Eliphaz Levi, by Mr. A. E. Waite, published by Mr. Redway in 1886, has had so large a circulation among English readers, that the editor anticipates a cordial Reception for this little volume. LONDON, February 1896.