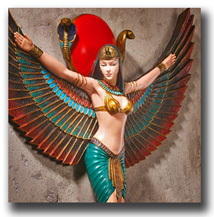 Witchcraft originated with the human civilization itself. The fear of the unknown and its imagined role in making our day to day life easy or difficult, created witches and their craft. Even though witchcraft as such was practiced mainly by experienced and old women, men also practiced it. Witches were the mediators between the human beings and the mysterious super powers such as spirits and angels. When a witch succeeded in resolving the apparently mysterious problem of someone, the performance was termed as magic, a process that could not be easily explained away through any logical analysis. The witches prayed to the higher powers or the spirits for help and guidance in resolving the problem by performing certain rituals and the whole process was called witchcraft.

Witchcraft, an earth based religion, was practiced in almost all the societies and cultures across the world according to local beliefs and traditions.

According to scholars of witchcraft, it was a belief system whose origin predates the majority of well known religions on this earth. It dates 40,000 years back to Paleolithic period. It has been evolving since then and its present form is quite different from what it was a thousand or five thousand years back. It did not probably have this name as well. Even different covens perform the witchcraft differently.
Archeological Discoveries

Archeological discoveries have revealed that people worshipped hunter god and fertility goddess during the Paleolithic period. This has been proved by the discovery of cave paintings which are estimated to be 30,000 years old. There is a painting that depicts a man with the head of a stag. In yet another painting, there is a pregnant woman standing in a circle with eleven other people. These relics go to prove that witchcraft is one of the oldest religions in the world. Wiccan view of God and Goddess aspect of the supreme creative force predates thousands of years before Christianity.
A Craft of the Wise

In the ancient times, Witchcraft was known as ‘craft of the wise’ as the wise persons were those who followed the path of nature and were in tune with its forces, had the knowledge of herbs and medicines, gave wise counsel and were held in high esteem as Shamanic healers and leaders in the village and community. They understood that nature was superior to human beings and that human beings were simply one of the many parts of nature, both seen and unseen that combine to form one whole. As Chief Seattle said, “We do not own the earth; we are a part of it.” They understood that what we take from nature or use, we must return in kind to maintain the balance and equilibrium. The modern man has, however, forgotten this and has paid the price in form of many ecological and environmental disasters.
Modern day Witchcraft

Unfortunately for the past several hundred years the image of the witch has been associated with the evil, heathenism and unrighteousness due to prejudices created by the Christian church. Of late people have started Understanding and practicing witchcraft as the true religion of God and Nature. There is renewed interest in witchcraft and witches profess to believe and practice the Witchcraft With a sense of pride and confidence. The believers in New Age movement have understood witchcraft in its true perspective.

Modern Witchcraft attracts believers from all walks of life and positions in society all over the world. They come together to understand the life, nature, evolution and mysteries of the universe through witchcraft. Witchcraft is the most democratic religion in the world. There is no rigid dogma and no hard-line regime except for a simple premise that we should not sow the seeds of evil if we want to reap the evil fruit multifold and secondly that we should not misuse the munificence of nature by disturbing its balance. Who would disagree?