Satanism Today An Encyclopedia Of Religion Folklore And Popular Culture 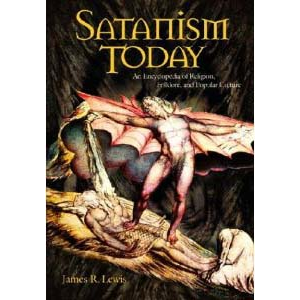 Proposing "to survey contemporary images of the Devil," this book examines not only "religious Satanism" but also various satanic organizations, traditions, and personalities. The general focus is on the Christian-Jewish-Islamic tradition of Satan, but there are articles discussing Buddhism and Taoism and their somewhat different demons and hells. Lewis also explores the contribution of Zoroastrianism to both Satan and the concept of hell in the three great monotheisms and the influence of aleister crowley and Anton LaVey on the modern satanist movement.

Several entries address Satanic Ritual abuse, both in individual cases and as a broader topic. One of the appendixes to the book is the 1992 FBI report on satanic ritual abuse that generally demolished the concept. Other appendixes contain samples of contemporary satanic writings and a survey Lewis did of satanists.

The book is in dictionary format. Articles range from a few sentences to several two-column pages in length. Most articles have see also references and a list of further reading, much of it recent. Where appropriate, Web sites are also listed, as many satanist organizations have considerable Internet activity.

The author or editor of numerous reference works on popular and fringe religions (e.g., The Encyclopedia of Cults, Sects, and New Religions) as well as UFOs, Theosophy, dreams, and witchcraft, Lewis (religious studies, Univ. of Wisconsin, Stevens Point) has written the first thoroughgoing study of contemporary Satanism. He treats a sensational topic without being sensationalistic, offering undergraduates and lay readers scholarly and reasonably objective assessments. Some 300 articles cover beings, symbols, religious beliefs, and popular media portrayals of Satan and hell, each with cross references and a short bibliography. Particularly interesting entries cover "backward masking," the supposed insertion of words recorded backwards on vinyl analog discs; Chick Publications, a publisher of frightening Christian tracts graphically depicting hell and damnation; and Dungeons & Dragons, the role-playing game that many parents thought led to Satanic behavior. (An article on runes, however, appears peripheral.) Lewis also discusses many films relating to Satanism but, strangely, not recent, popular demon-related television programs like Buffy the Vampire Slayer. A chronology traces the cultic background to modern Satanism, and appendixes of sample documents include the 1992 FBI study of "satanic ritual abuse" that stemmed accusations of such abuse. In fact, the articles on the ritual-abuse phenomenon and its ultimate debunking are worth the price of the book. Michael Newton's Raising Hell: An Encyclopedia of Devil Worship and Satanic Crime (o.p.) covers similar territory but is not as au courant and is heavier on the blood and gore.