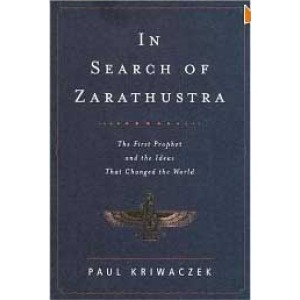 Book: In Search Of Zarathustra The First Prophet And The Ideas That Changed The World by Paul Kriwaczek

"In Search of Zarathustra" is very well-written and an excellent example of how to make history entertaining, without compromising the requirement to accurately inform. But the book is much more than simply history though. It's really a search for something important and very profound, and the author makes it a joy for the reader to join him on the journey. Part history. Part travelogue. Part investigation of the soul... All seamlessly woven together!

The ancient prophet Zarathustra, founder of Zoroastrianism, was a "deeply radical figure" who believed in "one true God," saw the world as a "battlefield between good and evil," and predicted the coming of a messiah and the end of time, convictions that became the foundation for Judaism, Christianity, and Islam. So intrigued did Kriwaczek, formerly a Central and South Asia expert for the BBC, become with Zarathustra's largely overlooked legacy, he launched an original, exacting, and many-faceted inquiry into the Iranian visionary's deep, abiding, and remarkably universal influence. Working backward in time and blending vivid accounts of visits to historic Zoroastrian sites with a fresh and consistently perceptive and surprising analysis of religious history, Kriwaczek weaves an enticingly complex tapestry. He seeks and finds evidence of Zoroastrianism in twentieth-century Iran and Afghanistan, parses Nietzsche's adoption of the prophet as muse and conduit, tracks the puzzling history of the Cathars, discerns Iranian elements in Gothic art and feudalism, and discusses how the prophet Mani nearly turned Zoroastrianism into a "world faith."

Hidden by the looming shadows of Christianity, Judaism and Islam, Zoroastrianism seems a largely forgotten religion today. Yet this ancient tradition so powerfully influenced these other three faith groups that they would not exist in their present state if not for the teachings of Zarathustra, the prophet of Zoroastrianism. Kriwaczek's lively and fast-paced study offers a unique view of Zarathustra's impact on Western religious history. Beginning in present-day Iran (the Persia where Zarathustra first began his teaching around 1200 B.C.), he participates in New Year festivities that demonstrate that pre-Islamic Iranian mythology and religious customs exist in uneasy alliance with contemporary Islamic practices. Kriwaczek then sets off on a backward travelogue, examining the significance of Zarathustra for Nietzsche in the 19th century, the Cathars of the Middle Ages and Hellenistic and Jewish thought from the third through the first centuries B.C. The prophet's teachings, recorded in the Avesta, offer a dualistic view of the world, a dualism that can be seen in the apocalyptic visions of the Book of Daniel and in the Dead Sea Scrolls. Zoroastrianism also featured divisions of heavenly beings, each lined up on one side or the other, supporting either darkness or light. In both Christianity and Islam, the influence of Zoroastrianism can be clearly seen in the pantheon of heavenly beings arranged in hierarchical fashion according to degrees of goodness or evil. This is the best and most thorough survey of Zoroastrianism, and its prophet Zarathustra, to date.

In some ways this book reminds me of two other books I've read: "In Search of the Birth of Jesus: The Real Journey of the Magi" by Paul William Roberts, and "The Other God: Dualist Religions From Antiquity to the Cathar Heresy" by Yuri Stoyanov (the author here actually cites an earlier edition of Stoyanov's book as a reference). The former is a light-hearted, more entertaining read, while the latter is a thorough, vast and erudite (though still very readable) survey. Both are excellent books, but what I especially like about "In Search of Zarathustra" is that it combines the best of both worlds: highly readable, entertaining, imaginative, and yet complete in its exploration of the subject.

This really is the best book that I've read in quite some time. I'm not sure what more I could say to recommend it. So instead I'll simply end with: Get this book. You won't regret it!!

Buy Paul Kriwaczek's book: In Search Of Zarathustra The First Prophet And The Ideas That Changed The World