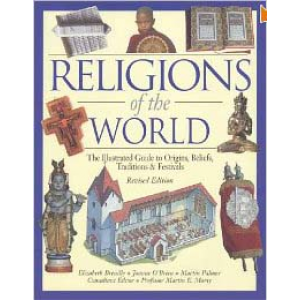 Book: Religions Of The World The Illustrated Guide To Origins Beliefs Traditions And Festivals by Elizabeth Breuilly

This book, originally published in 1997, has been revised–essentially, according to the authors, because of the rapidly changing role, status and place of religion. However, the alterations are so minor that they are virtually unnoticeable. Only the final page, Faith in the Future, has been entirely rewritten–but the earlier material is still perfectly valid. And, unfortunately, the new edition is inconsistent in updating statistics. The membership of The Church of Jesus Christ of Latter-day Saints is still given as about five million worldwide when it is well over 12 million. Figures in the sections on Hinduism and Jainism contradict other areas of the book; Sikhism quotes numbers from 1993, and Islam uses a 1996 calendar. Such sloppiness detracts from the books usefulness and Questions its necessity.

It covered the major Religions and was accurate. I looked very closely at the Christian section, because I am one, to see how close to the truth that section was and I was amazed at the accuracy of it, considering how many denominations there are. That way I could breath a little easier when I read the rest of it. As a whole it seemed unbiased and was fairly easy to read. I think it's a good book for anybody for the person who know nothing about different religions to someone how needs a refresher coarse to the vet how needs to solidify his Knowledge From another source.