The Egyptian Heaven And Hell 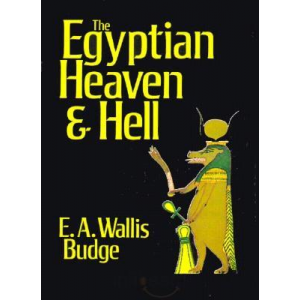 Book: The Egyptian Heaven And Hell by Ea Wallis Budge

THE present work is the outcome of two lectures on the Books of the Tuat, i.e., the Egyptian Underworld, or "Other World," which I had the honour to deliver at the Royal Institution in the spring of 1904, and it has been prepared at the suggestion of many who wished to continue their inquiries into the beliefs of the Egyptians concerning the abode of the departed, and the state of the blessed and the damned.

The object of all the Books of the Other World was to provide the dead with a "Guide" or "Handbook," which contained a description of the regions through which their souls would have to pass on their way to the kingdom of Osiris, or to that portion of the sky where the sun rose, and which would supply them with the words of power and magical names necessary for making an unimpeded journey from this world to the abode of the blessed. For a period of two thousand years in the history of Egypt, the Books of the Other World consisted of texts only, but about B.C. 2500 funeral artists began to represent pictorially the chief features of the "Field of Peace," or "Islands of the Blessed," and before the close of the XIXth Dynasty, about 1300 years later, all the principal books relating to the Tuat were profusely Illustrated. In the copies of them which were painted on the walls of royal tombs, each division of the Tuat was clearly drawn and described, and each gate, with all its guardians, was carefully depicted. Both the living and the dead could learn from them, not only the names, but also the forms, of every god, spirit, soul, shade, demon, and monster which they were likely to meet on their way, and the copious texts which were given side by side with the pictures enabled the traveller through the Tuat-always, of course, provided that he had learned them--to participate in the
benefits which were decreed by the Sun-god for the beings of each section of it.

In the present work the object has been to give the reader the complete Hieroglyphic texts of the BOOK A-M-TUAT and the BOOK OF GATES, with reproductions of all their illustrations in black and white, and English Translations and descriptions. The illustrations of the former work have been specially traced from the plates of the excellent edition of the tomb of Seti I. published by MM. G. Lefebure, U. Bouriant, V. Loret, and E. Naville, in the second volume of the Memoires de la Mission Archeologique Francaise au Caire , Paris, 1886. The illustrations of the BOOK OF GATES have been traced from Bonomis Sarcophagus of Oimenepthah I ., London, 1864, but for certain scenes I was permitted by the late Mr. G. Birch, Keeper of Sir John Soanes Museum, to compare the tracings with the scenes on the sarcophagi-is itself. A copy of the scene on the portion of the cover, which I acquired for the Trustees of the British Museum a few years ago, has also been included.