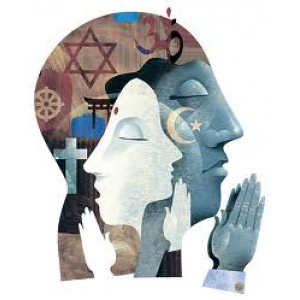 ndia is the land of Spirituality and philosophy and is considered to be the birthplace of many religions. Indian religion is varied in approach and different in meaning. Most of the types of religion in India are called Dharmic religions. In the Indian subcontinent Hinduism, Jainism, Buddhism and Sikhism form a subgroup of the larger class of "Eastern religions". Religion adds meaning and purpose to the lives of the people. It is actually a practice that enhances direct communication with God. A religion is a belief concerning one or more deities and incorporating rituals, ceremonies, ethical guidelines, and life philosophies. Thus, religion has diversified and grown to include major monotheistic religions in the country.

The most dominant religion in India today is Hinduism. About 80% of Indians are Hindus. Hinduism is a colorful religion with a vast gallery of Gods and Goddesses. Hinduism is one of the ancient religions in the world. It is supposed to have developed about 5000 years ago. Later on in ancient period other religions developed in India.

Around 500 BC two other religions developed in India, namely, Buddhism and Jainism. Today only about 0.5% of Indians are Jains and about 0.7% are Buddhist. In ancient times Jainism and specially Buddhism were very popular in India. Indians who accepted Buddhist philosophy spread it not only within the Indian sub-continent but also to kingdoms east and south of India.These three ancient religions, Hinduism, Buddhism and Jainism, are seen as the molders of the India philosophy. In 'modern' period new religions were also established in India.

One comparatively new religion in India is Sikhism and it was established in the 15th century. About 2% of Indians are Sikhs. There were other attempts to create new religions in India but they did not always succeed. For example, a Moghul emperor, Akbar, who reigned between 1556 - 1605, tried to establish a new religion, Din- E- Elahi, but it did not survive. There are other religious philosophies whose believers see themselves as a separate religion, but they do not always get this recognition. For example Lingayat of south India see themselves as a different religion, while others see them as a sect of Hinduism. There are also some tribal communities who demand to be recognized as separate religion from Hinduism. In the 19th century some Hindu reformers tried to remodel Hinduism to adjust it to modern period.

A wide assortment of religions exists in the country today. Hinduism is the ancient among the other types of Religion in India. This religion can be called the native religion of the subcontinent. Christianity and Islam visited the country with the invaders, traders and the missionaries. Many essentially Hindus got converted and baptised in to Christianity or Islam. Far eastern religions like Buddhism and Sikhism also developed besides Hinduism. Iranic religions like Zoroastrianism and Bahai are also new to the country. All religions in the country dictate peace and good will. Moreover, the different religious belief plays an imperative role in the history of the world.

The people of India can be benefited from learning about the different types of religion in India. Hinduism originated with Brahman as the central Lord. Brahmins are Vedik people. The Vedas describe the landscape of northern India, Pakistan and Afghanistan. Over and over the Vedas mention a mighty river called the Sarasvati where Brahmin communities flourished, where the Indus Valley civilization flourished and dispersed when the Saraswati river dried up around 1900 BCE. Long before, during the Ramayana period Brahmins migrated to Dandakaranya (Dandaka Forest) in the south with Viswamitra, the author of several hymns in Rigveda including Gayatri mantra, and practiced Vedik religon performing yajnas under the protection of Lord Rama and Lakshmana. Long before Rama went south, Agastya, a prominent Brahmin sage and writer of several hymns of Rigveda, crossed Vindhyas and established Vedik religion in south India. Sage Agastya appeared to Rama when he was despondent at the impending war with Ravana and instructed him in the use of Aditya Hridayam, a hymn praising the Sun God. Brahmins have been migrating to various regions within the Indian Continent since time immemorial and recently to other continents as well.

Max Heindel - Teachings Of An Initiate
Sir James George Frazer - The Golden Bough A Study Of Magic And Religion
Andrew Lang - Myth Ritual And Religion
Robert Ellwood - The Encyclopedia Of World Religions
Posted by Unknown at 5:12 AM