Gods And Goddesses In Hinduism 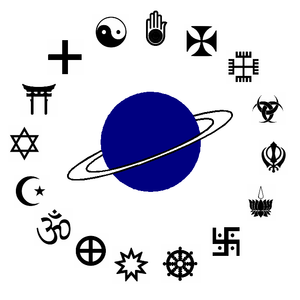 Hinduism is generally associated with a multiplicity of Gods, and does not advocate the worship of one particular deity. The gods and goddesses of Hinduism amount to thousands or even millions, all representing the many aspects of only one supreme Absolute called “Brahman”.

Therefore, to believe that the multiplicity of deities in Hinduism makes it polytheistic is erroneous. The Rig Veda says: "Ekam sath, Vipraah bahudhaa vadanti" (The Truth is one). However, to equate “Brahman” with “God” is imprecise. It is neither the “old man in the sky” concept, nor the idea of something capable of being vengeful or fearful.

The doctrine of Spiritual Competence (‘Adhikaara’) and that of the Chosen Deity (‘Ishhta Devata’) in Hinduism recommend that the spiritual practices prescribed to a person should correspond to his or her spiritual competence and that a person should have the freedom to choose (or invent) a form of Brahman that satisfies his spiritual cravings and to make it the object of his worship.

Thus, Hindus have a multitude of gods and goddesses. Deities are represented by a complexity of images and idols symbolizing divine powers. Many of these idols are housed within ornate temples of unparalleled beauty and grandeur. Hindus also worship spirits, trees, animals and even planets.

The most fundamental of Hindu deities, is the Trinity of Brahma, Vishnu and Shiva - creator, preserver and destroyer respectively. Other popular deities include Ganesha, Krishna, Hanuman and a number of Goddesses.