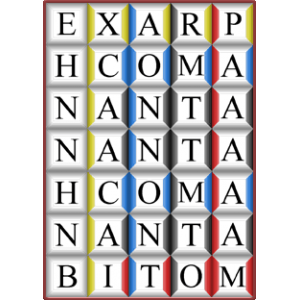 Book: Enochian Tablet Of Union by Order Of The Golden Dawn

Enochian Magick is a special branch of magick that was begun in modern times by Dr. John Dee, court astrologer to Queen Elizabeth I, and his psychic partner, Edward Kelly. Dee and Kelly discovered an ancient language they called the Angelic, or Enochian, Language. The alphabet of this archaic language has 21 letters. It has its own grammar and syntax, but only a small sample of it has ever been translated into English. Dee and Kelly were directed by Angels to produce several tablets containing squares, with a letter in each square. Kelly would gaze into a crystal where he could see Angels, and communicate with them. Dee would record the conversations between Kelly and the crystal shrewstone Angels. Together, they produced many curious tablets. Five of these are especially important—the Four Watchtower Tablets and the Tablet of Union. Each square on these tablets represents a region in the subtle, invisible worlds that surround the Earth. Each tablet represents a map of one of the five Cosmic Planes of Manifestation. These planes exist in the regions between the divine plane of God, and the matter of our gross physical plane. In addition, a person’s body is made of the elemental substance of each plane. The planes interpenetrate each other and are named after the five known cosmic elements: Earth, Water, Air, Fire, and Spirit. Each tablet corresponds with a color, a direction, and a cosmic plane and subtle body as shown below.

In addition to the Watchtower Tablets and the Tablet of Union, 30 special regions, called the Aires, or Aethyrs, were also investigated. They range in serial order, from the most material to the most spiritual, and are complementary to the Watchtowers. The Watchtowers and Aethyrs of Enochian Magick have striking similarities with the Sephiroth and paths of the Tree of Life as taught in Qabalistic Magick. Enochian Magick is a comprehensive system of magick. Besides the basic system there is Enochian Tarot. Enochian Tarot is a new system of divination using the deities and locations of Enochian Magick. Like the traditional Tarot system, it can also be used for meditation.